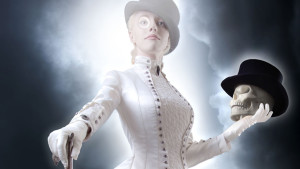 Bringing you uncanny heroines in shilling shockers and adventuress tales.

Elizabeth Watasin is the author of the Gothic steampunk series The Dark Victorian, The Elle Black Penny Dreads, and the creator/artist of the indie comics series Charm School, which was nominated for a Gaylactic Spectrum Award. A twenty year veteran of animation and comics, her credits include thirteen feature films, such as Beauty and the Beast, Aladdin, The Lion King, and The Princess and the Frog, and writing for Disney Adventures magazine. She lives in Los Angeles with her black cat named Draw, busy bringing readers uncanny heroines in shilling shockers, preternatural fantasies, and adventuress tales.
Follow the news of her latest projects at A-Girl Studio.

“I have no problem recommending this one, especially to fans of steampunk and other Victorian-era genres. I look forward to the next book in the series!”
—The Towering Pile

“Watasin’s sense of layouts creates nicely framed pages, and balances black and white spaces skillfully. Her faces are individual and emotional, are charming. Her dialogue’s natural and in fact is at times exciting.”—Comic Book Collectors Blog

“Elizabeth Watasin . . . is the finest black and white artist shy of the Hernandez Brothers of Love and Rockets fame.”

“Reading Charm School is like watching an affectionate parody of ’50s teen movies. We need stuff like this in comics . . . Watasin is obviously having a lot of fun with this, and it moves along quickly, assisted by her very assured black-and-white art.”

“Watasin simply introduces her characters and tells her story, and the readers love it on its own terms. She’s not the first artist to do such a thing — Los Bros. Hernandez are certainly pioneers in this regard — but she’s currently the standard-bearer, and rightly so.”

“But there’s more; her drawing has a wonderful and expressive range– now cartoony, now lively and human, now impressionistic and experimental. And the writing similarly ranges from comic to indignant, from Pogo-poetic to pathos.”

Elizabeth’s work has always been cool. She has what I like to call, “an honest line”. In short, the line weights and energy in the art is captured cleanly and effectively.

Elizabeth on Art of the Red River Radio Show.

Elizabeth’s INterview with the INShow, http://youtu.be/6oZA9nx3PVY

Interview with The Pulse

Bad Behavior has blocked 214 access attempts in the last 7 days.